“What were his symptoms?” was the most frequently asked question after finding out that my four-year-old had leukemia. At first, I was taken aback by the question. Why did it matter? I thought. We were in treatment now, moving on—at laser speed. I had no time to pause, to process the chaotic events leading up to his diagnosis. And yet, the awareness gnawed through my reality that first night in the hospital. In Standing at Water’s Edge, I write: After a day of seeking answers and direction, confusion cornered me. Why did I allow his symptoms to drag on for so long? I admonished myself during those dark, vulnerable hours of solitude and exhaustion. “Two months [...] 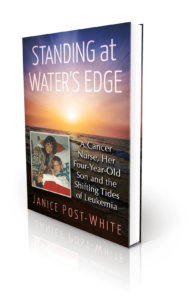