Making COVID Choices When the Options are Slim

I chose Evusheld, a monoclonal antibody to prevent COVID in immunocompromised people. I reacted and now my options are slim. How are you staying well?

I often told my students that three points make a better line than two when analyzing research data. And if they were seriously invested, four points make an even stronger case for predicting trends or outcomes. That’s generally true, especially if the connect-the-dot line is linear. I’ve just completed a single case study (me) that included four monoclonal antibody injections over the past year (three against SARS-CoV-2 spike protein), and I wish I had trusted my pattern of three previous adverse reactions before I consented to a more confident 4-shot line.

I reacted to all four injections in different but incremental ways. By the fourth shot—to Evusheld, two weeks ago—I had cumulative allergic/anaphylactic, neurologic, and cardiac-related adverse responses. Of course, it’s much easier to see a pattern in hindsight.

This line of data points is linear in its severity, and it’s convinced me to stop further monoclonal antibody injections. At least until my immune system calms down. Either a year between shots three and four wasn’t long enough or I’m likely to over-react regardless of how long I wait (which would suggest that it’s the inactive ingredients my body reacts to).

Although the acute allergic symptoms increased each time, they resolved with treatment. The room-spinning dizziness, blurred vision, and fluctuating blood pressure and heart rate, however, lingered the entire year, often alternating in a one-month pattern of bad to somewhat better, but never back to “normal.” Just as I started to feel better, a new trigger (usually a viral infection—not COVID) would set me back another month. By the third shot, I started to see a pattern. The fourth one made my decision final.

Weighing the Risks and Benefits

Why did I accept Evusheld, the monoclonal antibody injections developed for those who are immunocompromised or have adverse reactions to the COVID-19 vaccines? Because the reported risks were low, the potential benefits convincing (6 months of protective antibody with a 77% reduced risk of getting COVID), and my risk for complications from COVID high. And I was desperate. I wanted to be part of the functioning world again.

I am tired of living in a hyper-vigilant state among family and friends who have (predominantly) resumed living their lives—gathering at events, eating savory dishes prepared by someone else, and reconnecting with friends over coffee. Evusheld offered me hope.

My body doesn’t make sufficient B cell antibodies and I’m on a monthly infusion for rheumatoid arthritis that blocks T cells—a second line of protective immunity against SARS-CoV-2. With an immune deficiency, autoimmune conditions, a genetic clotting disorder, and asthma, I’m at high risk for complications of COVID. Evusheld would give me the antibodies that I didn’t produce on my own in response to the vaccines. (NOTE: Evusheld is not a treatment for COVID-19 or a vaccine, but a pre-exposure dose of antibody to the SARS-CoV-2 spike protein intended to block entry of the virus into the body).

AstraZeneca’s Evusheld has only been approved by the FDA for an Emergency Use Authorization since December 2021, with a recommended dose increase in February 2022. My research on adverse events was limited to the one clinical trial (PROVENT), internet and social media searches, and verbal reports from patients and staff at the infusion center where I get my iv immunoglobulin. I found no anecdotal reports of adverse reactions from individuals receiving the injections or from nursing staff administering them. In the study, reactions were rare (2-3% in both intervention and placebo groups), and most were minor (injection site pain, headache, cough, fatigue), although there was one allergic and one cardiac event (of 3461 people) in the Evusheld group.

To reduce my risk further, I negotiated to get half the dose one week and the remaining half dose the following week. (My reaction was probably not dose-related, and therefore I can’t recommend this alternative).

The potential benefits of getting Evusheld seemed to outweigh the risks—perhaps because I wanted them to. I decided to take my chances, hoping that my typically over-reactive body would accept the antibodies without too much fuss and give me some reprieve from the hyper-vigilance of living in the world again. 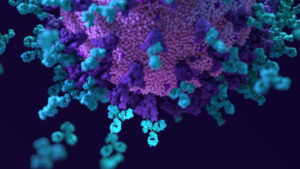 No, I don’t regret it. I made the best decision at the time with the information that was available. Sometimes that’s the best we can do.

I was willing to risk a reaction, even given my history. I had already made the decision not to get a vaccine booster (in any form) because I had reacted twice, with lingering effects, and my body didn’t produce adequate antibodies in response. Why get more of what can hurt you and doesn’t provide the expected benefit?  If the reactions to the vaccines had been short-term and resolvable—a minor inconvenience in my view—and the antibody levels higher (more protective, potentially), I would have gone ahead with the recommended boosters, deeming the risks worth the benefits.

Evusheld gave me (and gives 7 million other immunocompromised Americans) another option to get protective antibodies. Unfortunately, the protein antigen (or other ingredients) triggered my dysfunctional immune system. I had hoped for the best, but I’m not surprised, given my patterns of past reactions to other monoclonal antibodies and vaccines. I’m slowly beginning to recover.

Meanwhile, I’m hoping that despite my reaction, I have some protective antibodies for the summer. And I’m on iv immunoglobulin, which is providing some (albeit variable) level of antibodies against COVID now that immunity has reached the general population of plasma donors (it takes 3,000-10,000 donors over about 10 months to make one infusion).

I still believe that the risk of having COVID, the illness, is far worse than the risk of vaccine and antibody reactions (in incidence and severity). And that’s how I made my decision to go ahead with data point number four. I wanted to more safely be with family and friends this summer. I wanted to mingle with those who have resumed living despite a pandemic.

In retrospect, with a history of immune deficiency and autoimmune conditions, I should have trusted my decades-long decision to avoid vaccines and injections that trigger an aberrant immune response. But we’re in new territory here, learning together, individually and collectively.

So, why is this relevant to you? It may not be. Or you think it may not be. After all, you (most likely, hopefully) don’t have these immune conditions that put you at greater risk, and you may not have any close friends or family members or unvaccinated children you are trying to protect. Or maybe you do.

If anything, if you read this, you are more informed and aware of how hard some of us try to protect ourselves and to live in this new (post?) pandemic world. I took a risk in getting Evusheld, knowing my history of strong and debilitating reactions, and decided it was worth a try.

Everyone has to make—and live with—their own decisions. Please make your choices carefully and considerately. My lingering reactions mimic what many “long haulers” are reporting after having COVID. You do not want to be one of them.

Sometimes it’s very lonely here at home, especially while all of you are out and about playing in the world again. Don’t stop for us. Enjoy life—we want that for you. But take precautions, for yourself and us.